We have had some enjoyable late fall weather, including some snow, rain, wind and calm.  Here are examples of what we saw over the last few days:

The last of the Mallards are passing through…

I found it surprising that the spore capsules of this moss are emerging at this time of the year.   Moss reproduction seems to be quite complex, a topic that I need to learn more about.  Interspersed are Pixie Cup lichens a relative (Cladonia) of British Soldiers. 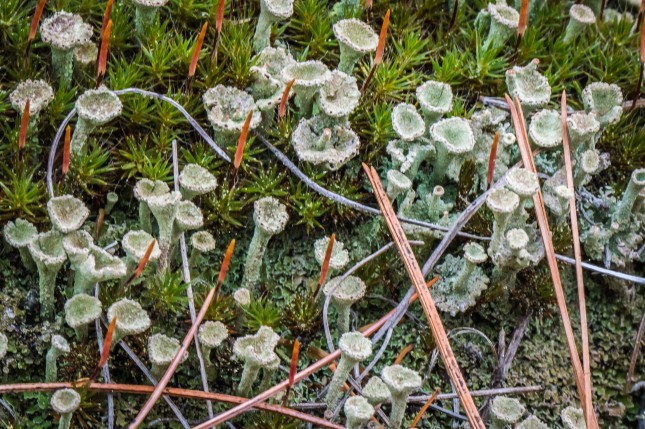 Alders have two catkins (male and female) that form in the autumn, are dormant over winter and the  female is wind pollinated with pollen from the male catkin in spring.    Here two male catkin are hanging down on long stems.  The others may be female catkins.  I will have to observe further…..

The butterflies whose caterpillars supped on the leaves of this plant are now in Mexico.   A big bunch of them arrived at El Rosario Sanctuary on Nov 2, 2016: 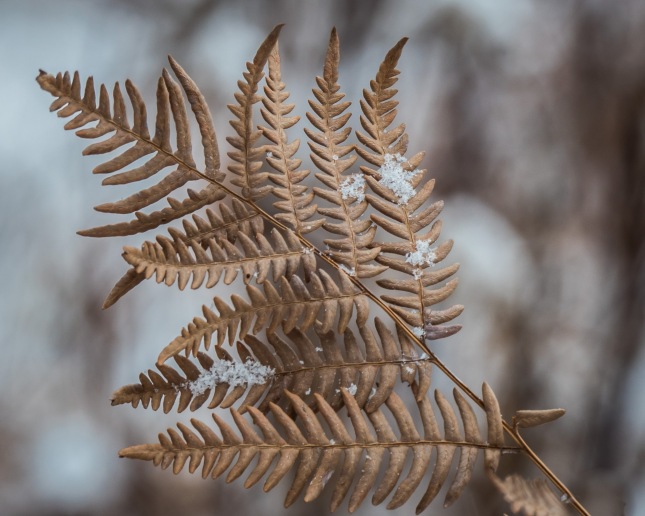 Another milkweed caught in the act of dispersing its seeds during a snow flurry…. 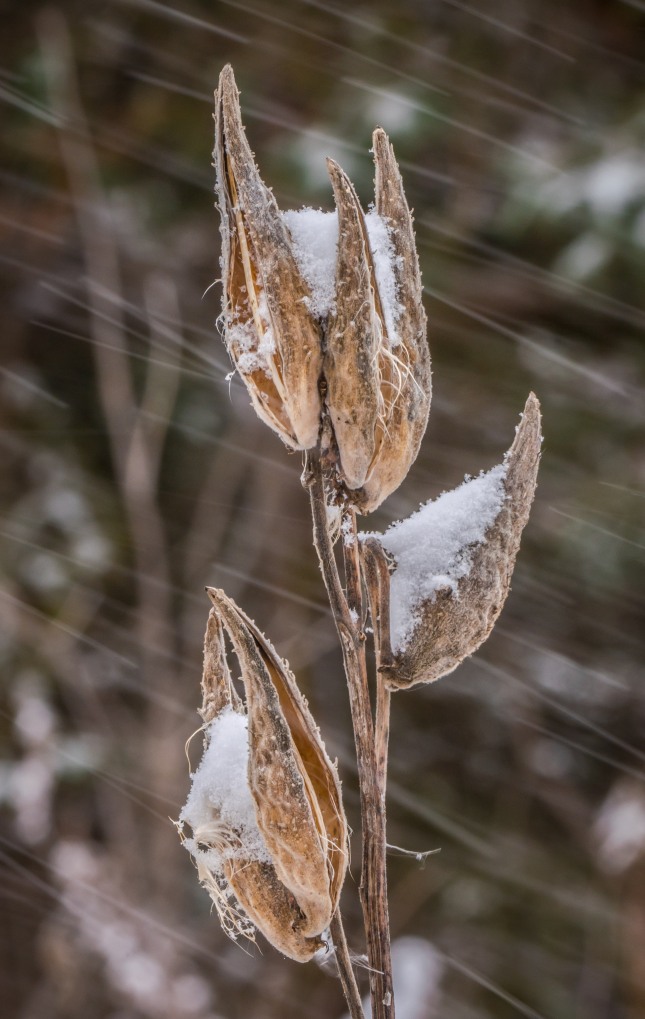 One of the fall asters against the textured snow ….

This has been happening with increasing regularity, apparently due to aging equipment that is failing. 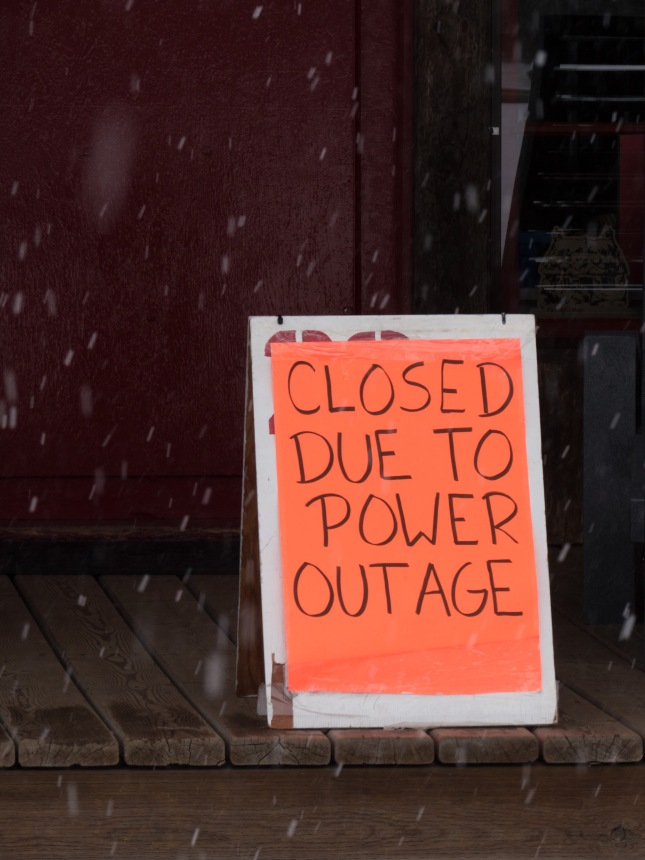 (Tall) Meadow Rue is so very delicate after it drops its seeds. 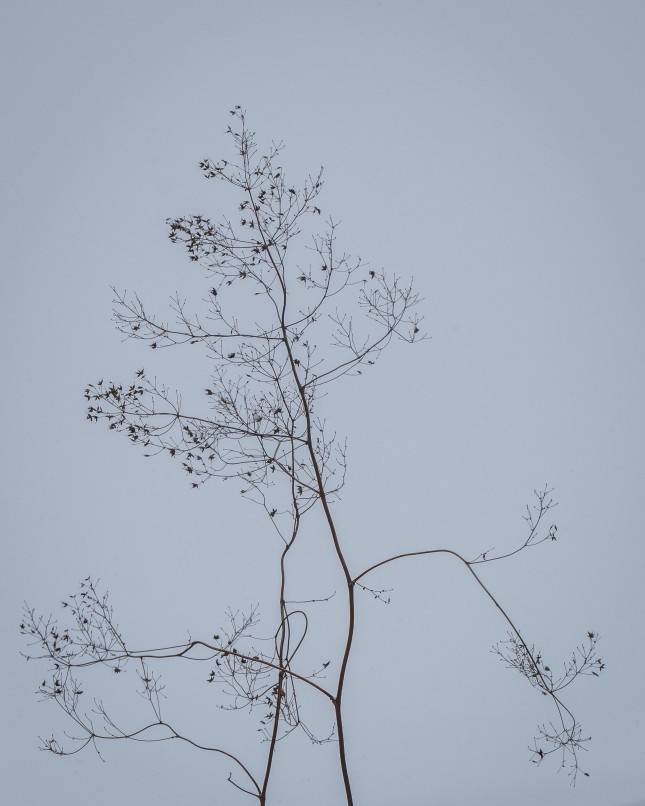 And so is Dogbane …. 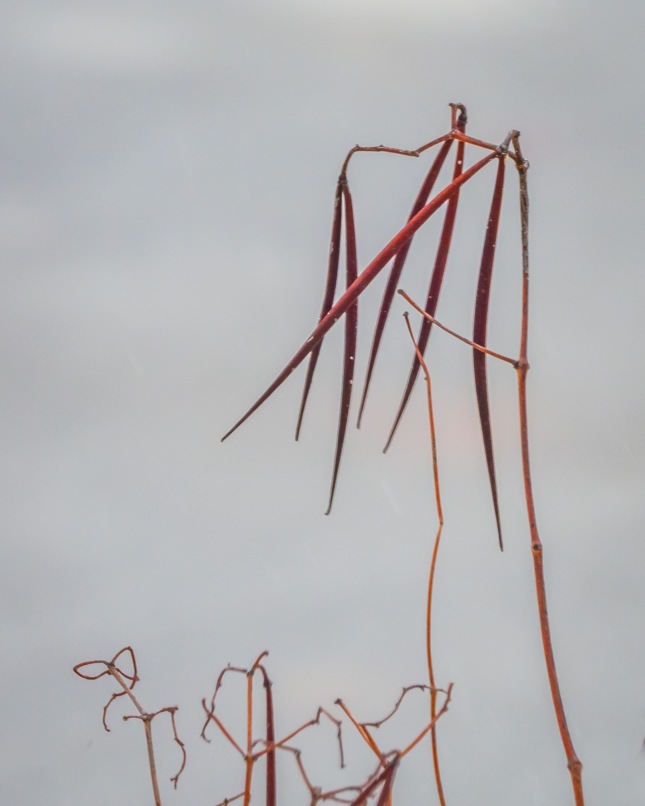 Twin River from the bridge, with the long lens …

Meshaw Falls on the North Channel of the French River.   I know that it is fashionable nowadays to try to emulate some of Ansel Adam’s work by converting moving water to milky water.   I am not a fan of that cliché, preferring to use enough motion blur to indicate movement, while preserving the structure of the water flow.  This was shot at 1/100 second…..just a long enough shutter interval to let some motion blur animate the photograph. 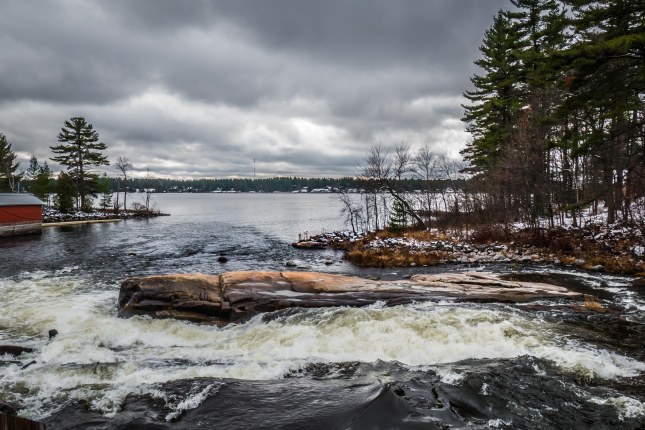 I made this photo because these strange objects are common on ponds when they freeze.  Too small for otter or beaver breathing holes.  They remind me of dendrites of the human brain.   [If you can understand that link you are a better person than I am, Charlie Brown!] (Maybe Oldtimers Disease is settling in on me!) …

I drove almost to the end of Bekanon Road of the Henvey Inlet Reserve on November 26 to see one of Herbert Fisheries tugs tied up at a dock on the southern point (as I looked west).

This is from the sand beach about 1 nautical mile west of where Henvey Inlet narrows.

Homemade bench at the above beach:

The last of the blackberry leaves on the Beckanon Road….

Just after I made this photo  I met a nephew of the late  Art Solomon, an Ojibway elder who did important work in the Canadian Justice System, who wrote Songs for the People, and who was a big help in the writing of the Science North production of Shooting Star ,  a 3-D, 70mm, laser enhanced story of a young girl’s spirit-quest in the Sudbury Impact Crater.  Not surprisingly the man was quietly parked in his car, observing nature and listening for the bugle call of one of the elk that he had heard there earlier.  We had a very enjoyable chat.

A classic shot of the Mackerel sky and its reflection from in front of St Amants Restaurant and Waterfront Inn.  Those post anchor the dockage in the summer, where Floatboat II spends it time ashore.

This is the good ship, Adeline, named after the mother of the man who made it and who still lives aboard from time to time.

The Still River as it empties into Byng Inlet from Old Legion Road.

Just upstream, left of the above, a family of beaver are laying in a huge stock of feed, stripping the far shore of birch and poplar.   It is right next to their lodge.

These are Mary Holland’s explanations of what is happening:

In some of the above images you might enjoy clicking on the photo to see some of the fine detail.