On the way back from a treat of Black Cherry frozen yoghurt at Moose Lake Trading post, we showed friends the location of the pitcher plants on Hwy 529, 0.6 km north of Hwy 529A, in the westside road ditch near a rock outcrop in the tamarack swamp.

The purple flowers are on stems about a foot above the pitchers at the base. 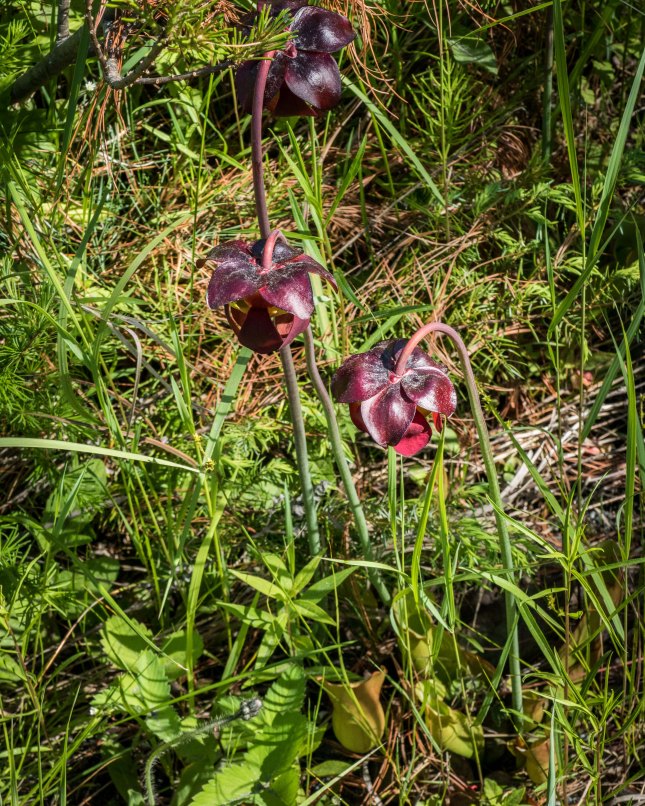 In spite of a fierce attack of a swarm of black flies, we got out of the vehicles to see the “pitchers” …

The side-lighting reveals the downward pointing bristles which help to trap insects in the liquid at the bottom of the pitcher.

After gathering a handful of wild strawberries ripening along the roadside, we stopped to examine some of the Solomon’s Plume for Crab Spiders.  None were seen.

We did see several of these skippers nectaring on the Ox Eye daisies though.   Painted Ladies, the butterfly, were also common as were Viceroys, which are often mistaken for Monarchs.  The wind was blowing the flowers wildly, making photography difficult.

Near the Twin Rivers Bridge, at the confluence of Harris Creek and Naiscoot River, there are many Cow Parsnip plants growing along the roadside.  Although they are somewhat phototoxic they are not as deadly as their look-alike close cousin, Giant Hogweed.

A nice little explanation showing the difference is at this link.   It makes sense to avoid both plants.

Mary Holland has this very interesting challenge for the pattern recognition part of your vision system.