Today on my way home from Sudbury I spent a couple of hours touring the remnants of the Burwash Industial Farm.  I first visited that farm in the early 1970’s when the Ontario Governments was planning to close it and “give” it to the local College of Applied Arts and Technology.  We, Cambrian College, decided NOT to accept it.  It  is now National Defense property.

This birdie was buzzing the fields then settled on the fence … until an approaching MNR truck scared it off.  I had to hurry to get my one photo of the amazing Bobolink. 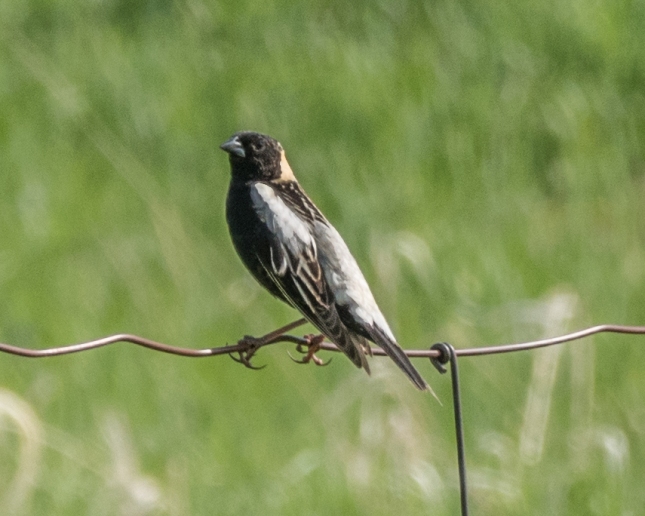 Lucky to get this birdie checking out the painted turtles.   See the red shoulder of this RW Blackbird?  The spread tail is NOT a good indicator of Blackbirds as the bigger Common Grackle seems to do the same thing.

Basking in the warm sun. 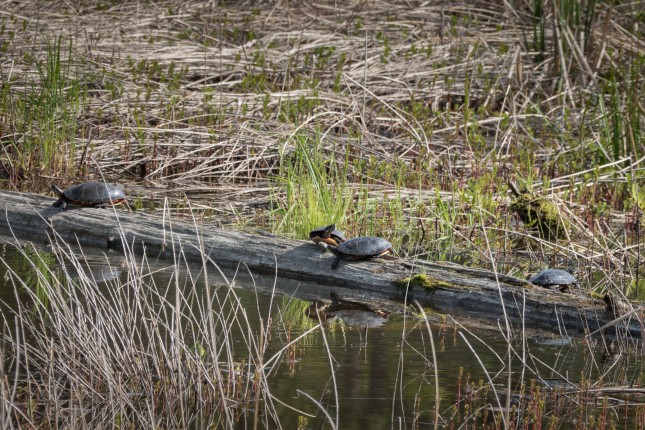 This is Neilly Lake,  East of Cemetery Lake.

Lots of remnants of human inhabitation, including this pretty honeysuckle cultivar.

Little wasps were busy pollinating the Mountain Ash (Rowan).  This bird attractor was introduced to North America, probably from northern Europe where it is common.

Pretty paired samaras of the Manitoba Maple or Box Elder, one of the “gifts” from out west that found it way into landscape plantings all over Ontario.  Too bad.

For a minute I though I would have to shield my eyes…. but the silvery blue on the right did a pirouette and took off.

Leaving this one to pose for the photographer. 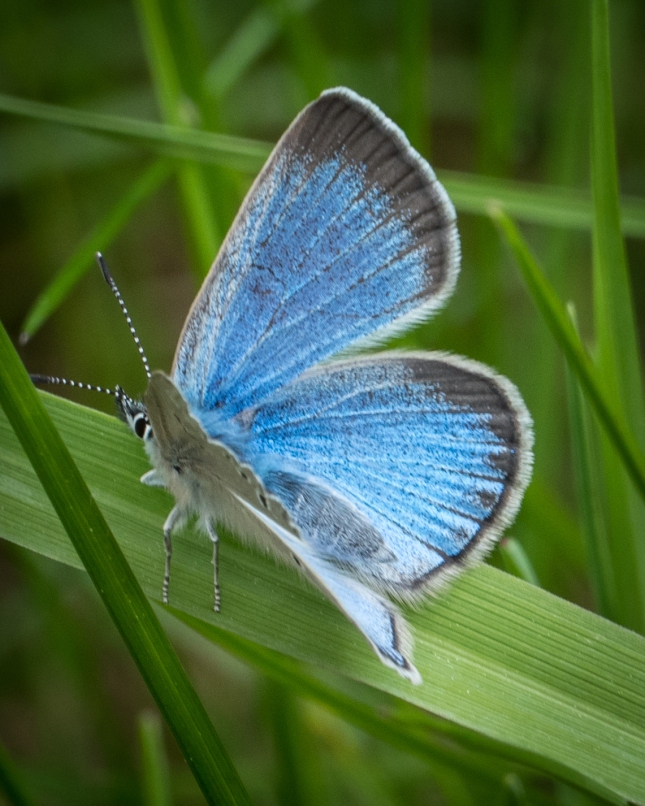 This is obviously the end of the road for me.  Camp Bison (and the Wanapitei River) is about 4 km SW of this point.

Southbound CPR train on the CNR trackage.   Those communications towers are probably near McVitties Power Dam.

(Canadian or Eastern)  Tiger Swallowtail getting nectar from a clump of Black Cherry blossoms: 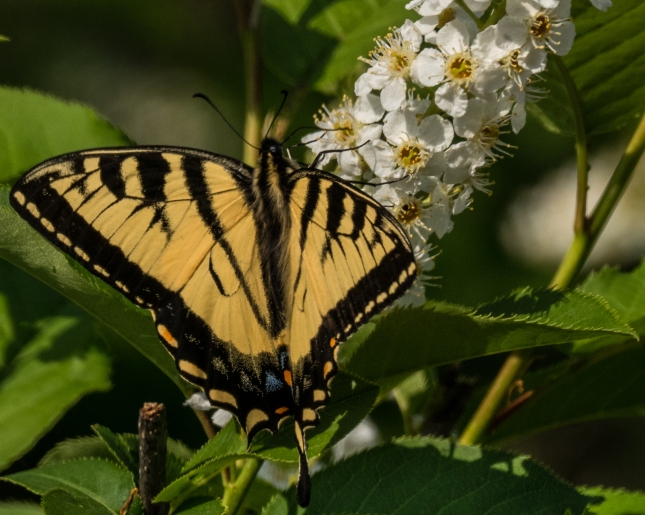 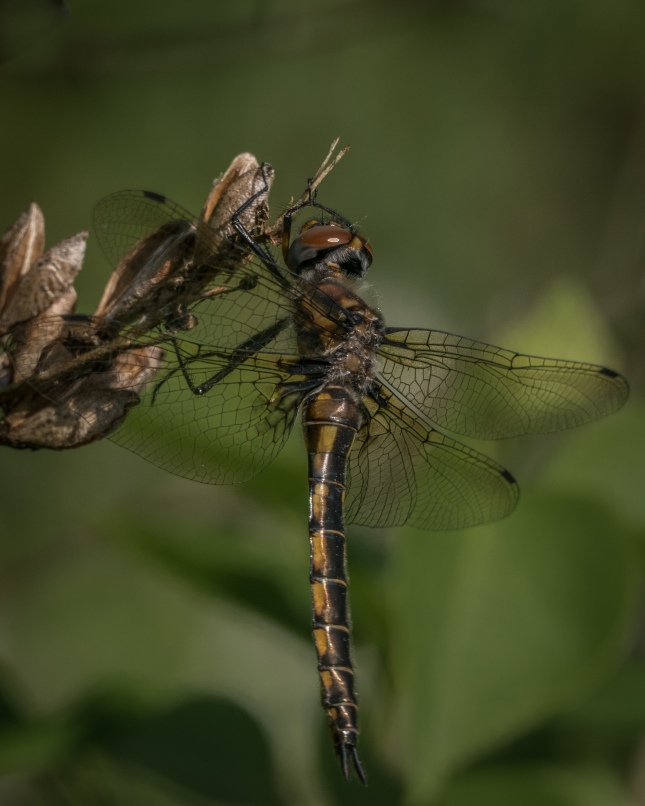 One of Rebecca’s Bees!

Some kind of Apple cultivar: 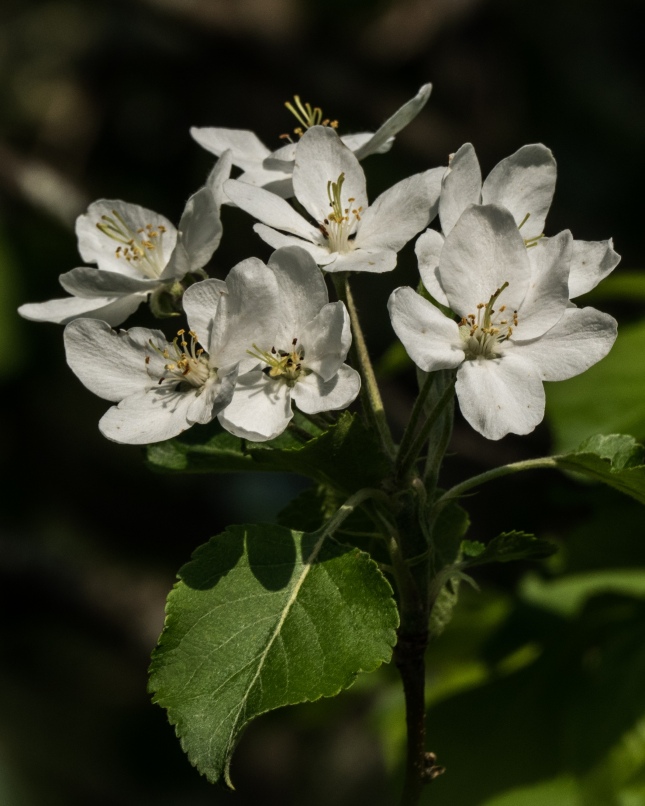 another one of Rebecca bees. 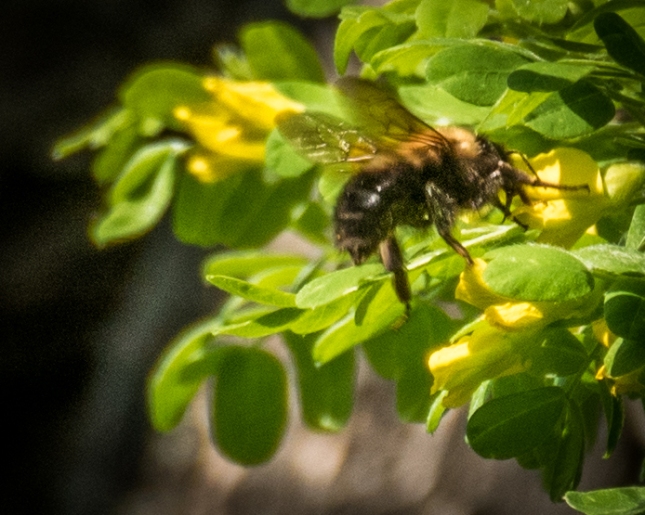 I was reminded of Rebecca, the bee expert when I took these pix, especially since  CBC’s “As It Happens” was interviewing an “environmentalist” about neonicotinoids affecting bees at the time.

It is too bad that the CBC didn’t get a real scientist to discuss the topic.  (Is the CanGov is prohibiting the CBC from interviewing real scientists?)  Neonicotinoids are modern synthetic substitutes for nicotine sulphate which was used historically as an organic pesticide on garden/orchard produce.

But there are problems associated with the use of these neonicotinoids.  The Canadian Senate successfully kicked the can down the road a couple of days ago.

Small minds?  “About one-third of the human diet comes from pollinated plants, the senators said.”

On the way out of Burwash I saw this dead spruce mimicking a fall tamarack in the late afternoon sunshine.

On Hwy 69 I noticed this interesting sight on one of the trees, 1/3 of the way in from the right hand edge: