On Monday, 23 November a very strong streamer started in the afternoon and kept loading snow from SW Lake Huron directly at the Georgian Bay at Britt, the Environment Canada Radar site at the centre of the co-encentric circles.  It ended by early morning on Tuesday, 24 November.  This was a typical radar plot:

So on Monday afternoon, we spent a few hours trying to capture the snow as it was falling.

The next four photos are all at the mouth of the Still River taken from the truck on Old Legion Lane.

The snow varied a lot, from sleet, to snow grains, snow pellets and, often, these snowflakes.  (The angels fluffing their featherbeds.)  The air was quite calm, probably <15 Km/hr.

Here are those clumps of grass and sedge (again) with no snow falling:

These were all taken on the Old Still River Road, late in the afternoon. 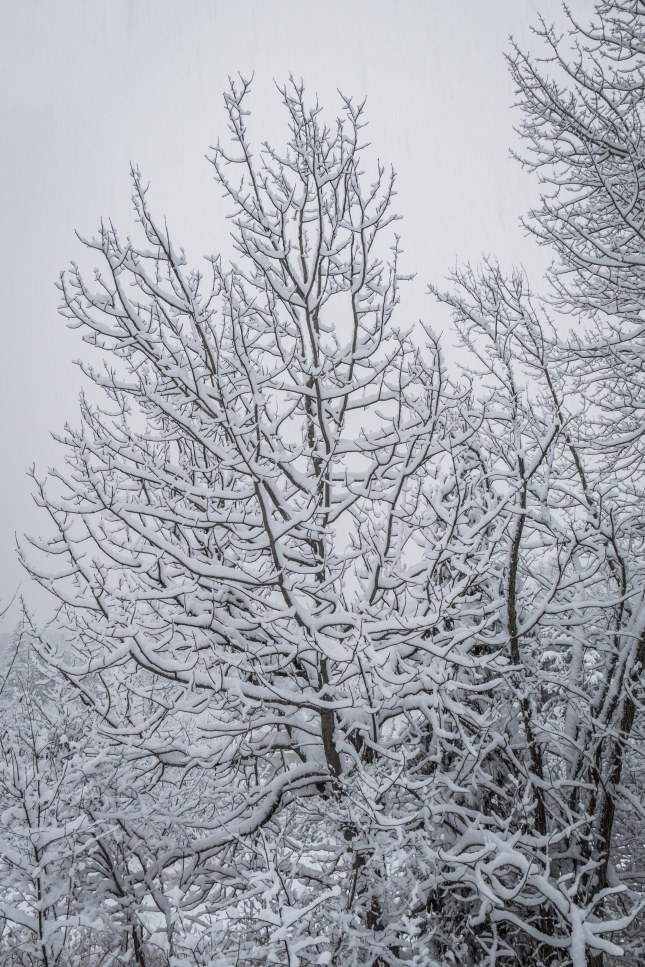 Although the light was very flat in the very light snowfall, the snow had accumulated significantly since the first shots, encouraging me to photograph the scenes before the wind freshened.

The challenge in the first few photos was to get useful streaking (longer exposures to get motion blur) of the snowfall, along with a good exposure so that I could capture the texture of the scene as much as possible.

The late afternoon shots were a bit trickier as the light was so low.  To minimize noise the ISO was kept at base (125) for all of the photos.  The very last shot above was shot from the truck window, elbows braced, ignition off, FL 25mm (equivalent), f/4.5 (DoF equivalent f/11.8) and shutter interval of 1/25 second.  Shot in RAW, converted and processed in LR 5.6.  The processing was simple: I pulled back highlights, pushed whites and shadows where required and increased clarity a bit … usually to strengthen a horizon or tree line where the precip was heavy.  Getting snow texture is tricky but I am quite satisfied with the above results in very flat light!

The focus peaking and zebra striping (105%) of the FZ1000 came in very handy as most of the images were manually focused using Manual Assist and exposed “to the right” of the histogram using spot metering and locking the exposure when the zebra striping indicated that I was starting to blow highlights.  These two very nice features were transferred to still cameras from high end video cameras.  They are especially valuable with shooting Live View with Mirrorless Cameras.

I believe that you can see the exif files for all of these photos if you download them…. or, if you are using Firefox as a browser, use FxIF (right click with mouse on image, bottom of the list) to read the exif data.

Next post is what I was able to capture the following day, Tuesday, 24th.   I didn’t have much time as I had my regular appt with our Nurse Practitioner and then a luncheon appt in Sudbury, 100km on slippery roads.  But I did manage to get a few photos that were quite nice.