We captured a few interesting views

at the end of September.   A few samples:

Adeline and the US Geological Survey Sturgeon at the town dock:

Along the Burwash Road:

(YUCK!  What an ugly representation of the sky!  It shows fine on the original.   I will leave the above mess here until I figure out what is happening during the upload process.)

Same fierce sky, with CPR mainline in the foreground: 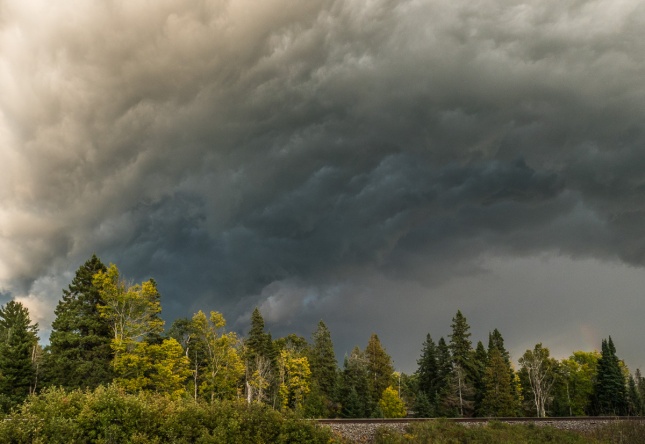 I tried to edit the post to get a higher definition of a photo of a crow uploaded, with little success.  Click on the image below to see the eyelid of the crow:

We’ll see if it works this time!

Yes.  Double clicking on the image seems to work!

We had an hour or so of bright sunlight in the early afternoon of September 29, so I found a patch of Large Leaved Asters and looked for pollinators.  I was not disappointed as I pressed the shutter 60 times over a 7 minute period, all while sitting in the car.  It is fun to find the several insects on most of these photographs.   During this coming winter I’ll try to ID these pollinators as I am getting increasingly interested in their importance to our natural world.

Here are 20 photos (the other 40 are repetitious) showing different kinds and species of pollinators: 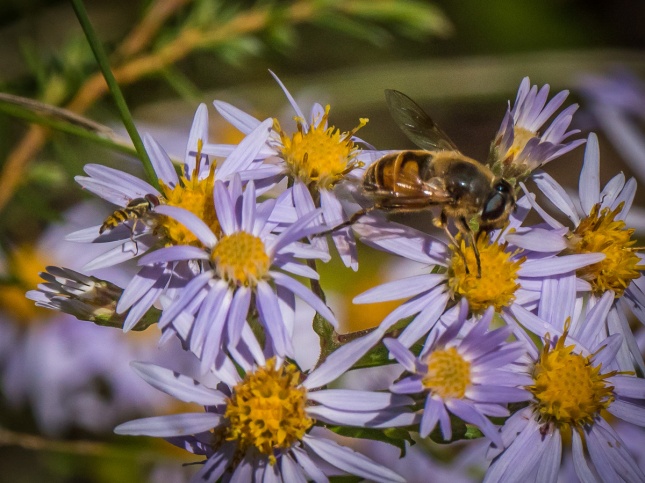 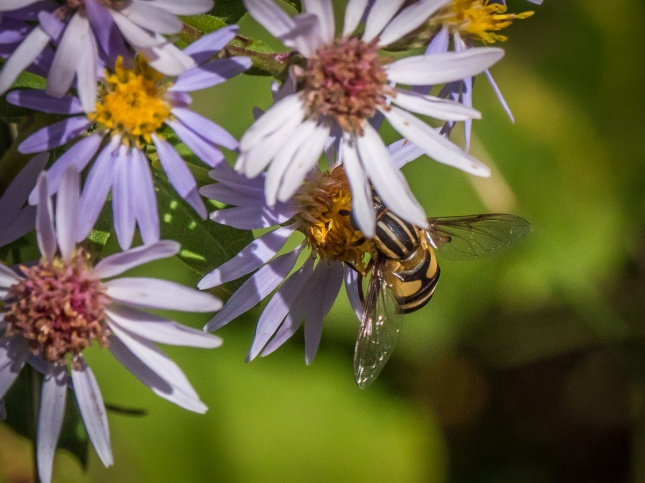 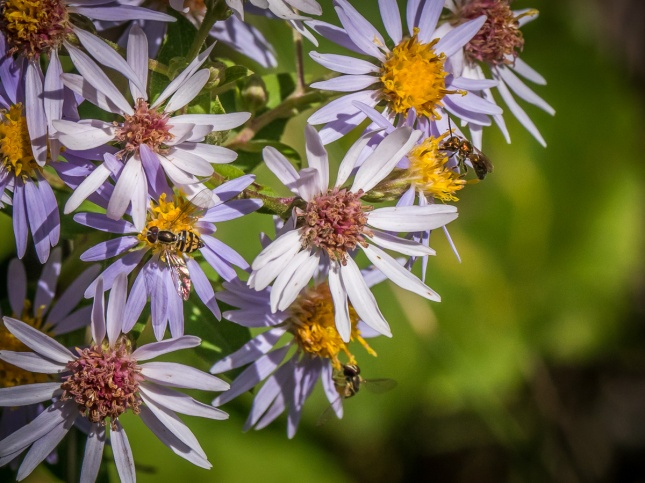 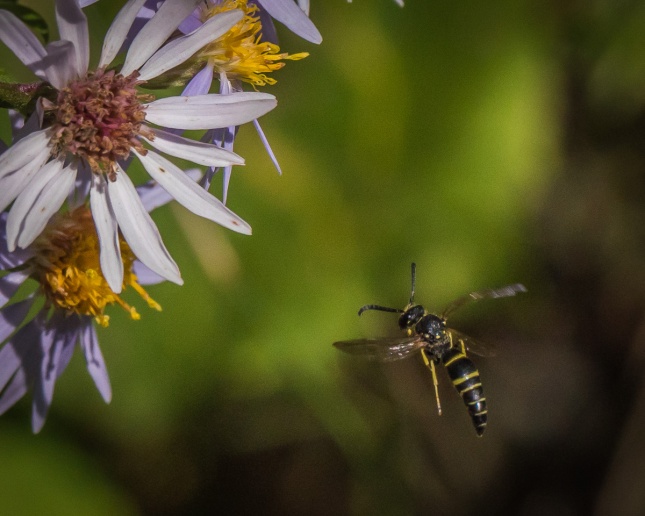 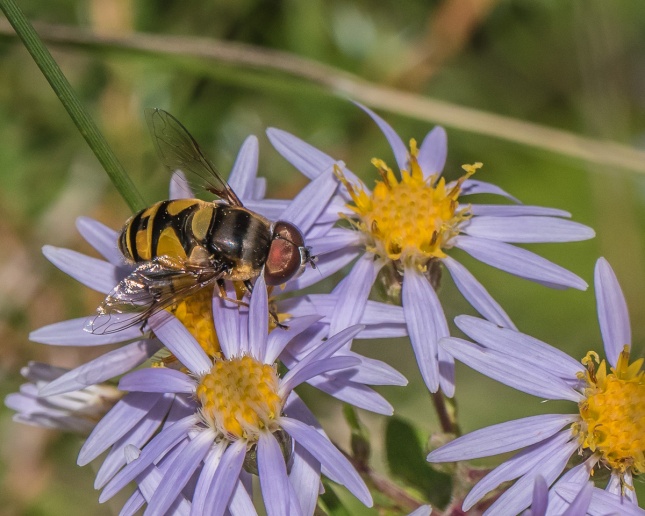 It was quite a  magical time, seeing all of these beasties filling up on nectar at these last of the Asters.  Can anyone recommend a good field guide to hoverflies, bees and wasps?  Many thanks.

All of the above have intact exifs and are downloadable at less than half a MB each*.  Leica 100-400 mm lens mounted on a Panasonic Lumix GH4 at max focal length (800 Full Frame equivalent) giving a working distance of about 1.3 m, all shot from the front seat of my car.

*Here is #18 again, this time uploaded at 1.6MB with no limit on its edge dimensions.  Click on it to see the difference in detail between this image and the ones above with a smaller file size. 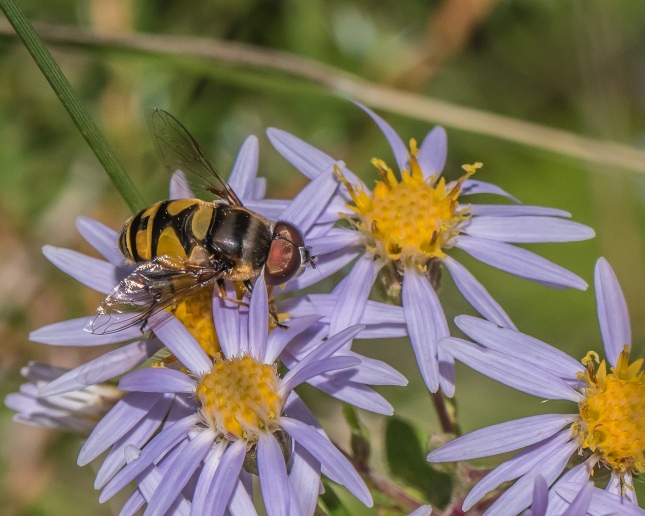 Lots to see out there.  The camera is a good tool to enlarge one’s vision.

Here are a few photos of a late blooming Pale Corydalis, one of D.’s pansies, a sparrow and a crow inspecting the photographer.

Pale corydalis, usually one for the very early spring wildflowers blooming in September alongside its long narrow seed pods.

D. (trans?)planted these a few weeks ago. 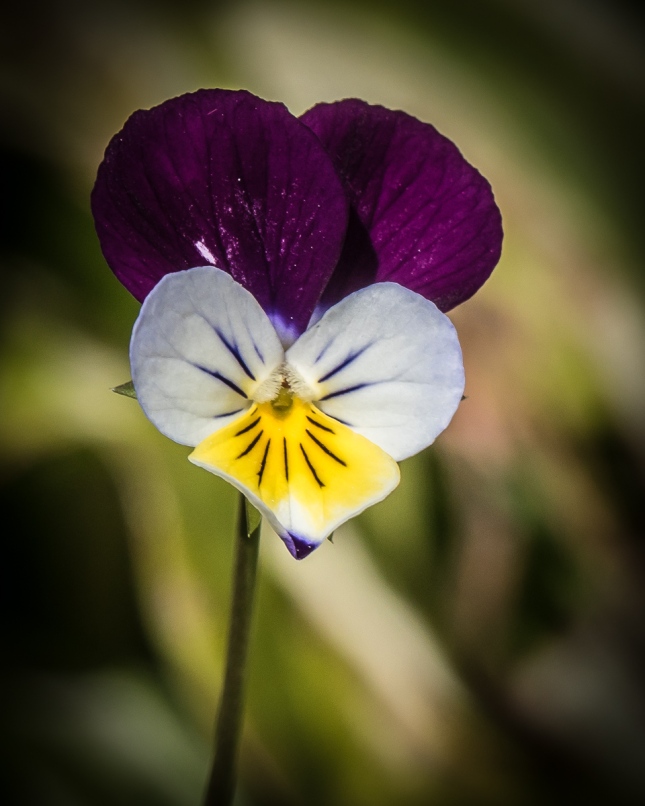 This fellow was hopping around in my driveway looking for seeds and grit, I think.

A common sight on Riverside Road near Shirley’s place.  They are guaranteed of a snack there. 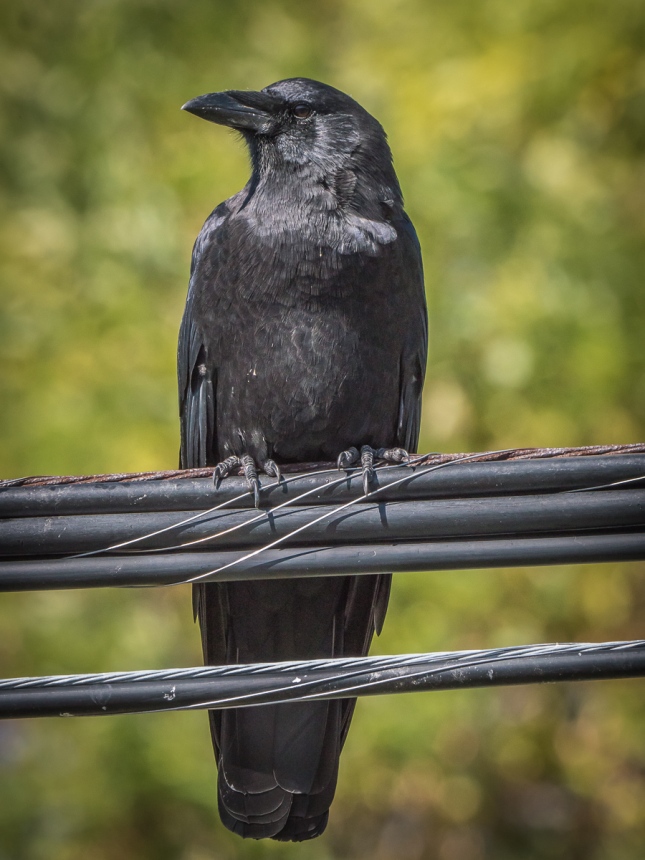 Click to have a close-up look at the first one to see its eyelid, caught half open.

I had a bit of a problem uploading the above so please click on the image below to check the crow’s eyelid:

I hope that it works this time!

Here are some more mushrooms that were seen the last days of September:

A nice harvest by D & V found along Riverside Drive.  Some (orange) Chanterelles and a pair of (pale) King Boletus or CEP mushrooms (with spore tubes instead of gills).   These two species of wild mushroom are highly prized for their gourmet values.

Some Amanita muscarias at varying stages of maturity. 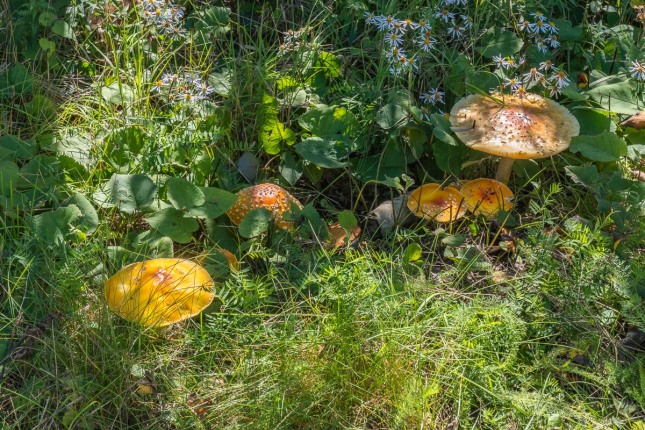 Very dangerous stage of ANY MUSHROOM.  Although these MAY  be a specie of Boletus, I would NEVER harvest them until the cap has separated from the stipe, permitting a positive ID.

Undoubtedly another Bolete, even though the underside (with its spore tubes) is not visible. 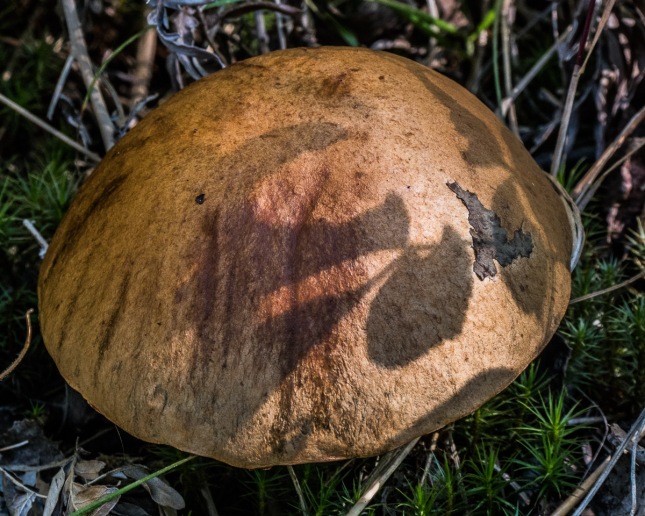 A few Amanitas in the lawn next to Holy Family Catholic Church in Britt.

Perhaps some more Suillus (?) under the pine tree on same lawn. 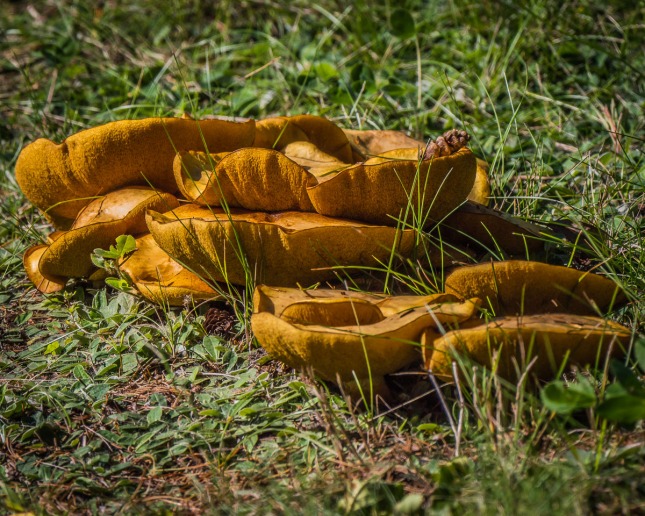 Above Amanita and Suillus(?) side by side.

In the foreground of the above are these.   Also probably a Suillus.

This is probably one of the Clavariaceae(?) or coral mushrooms which usually grow in deep shade, except for this specimen which had a shaft of very late afternoon falling on it. 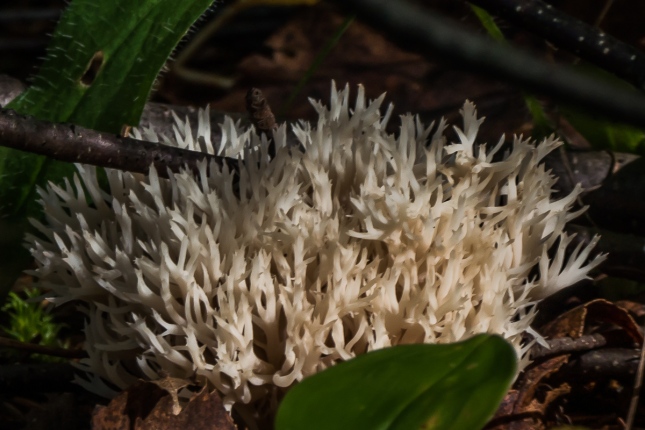 This is possibly one of the Russulaceae Family possibly a Lactarius.

Probably a nice B. edulis!

Possibly a nice Agaricaceae(?) in D and I’s field, recently mowed by A.:

Careful readers will not that I won’t ID a mushroom by sight alone.  It is important to look very very carefully at specimens, especially if you want to eat them.  Spore prints are very useful in identifying mushrooms.